I Suck at Clipper Card

Caltrain is converting the the Clipper Card electronic payment system. I've been a Caltrain monthly pass holder for about three years as I commute daily from San Francisco to Mountain View. I've been very happy with the existing monthly pass - it is a simple paper ticket that is mailed to me each month.

But of course, change is good, so that system is coming to an end this month. Now all monthly pass holders must electronically load their passes on their Clipper Card instead. That's slightly more annoying than carrying a paper pass. For example, your pass doesn't get loaded onto your card each month until you tag your card at a station. Another problem is that Caltrain uses a zone payment system, which means you have to tag on and off so Clipper knows how far you've traveled and can deduct the appropriate amount from your card (if you aren't using a monthly pass).

This month I got my new Clipper card and my first electronic monthly pass. I knew that I had to tag my card at the station to download my pass on the first of the month. Note that Clipper cards can hold both monthly passes and electronic cash. As I tagged my card the first time, I saw a message about 'new pass downloaded' and something about money being deducted. Hm, that's weird - why is it taking cash off my card as well as loading the pass? Well who knows, let's get to work.

I continued on to work, and the next couple of days everything went fine. The conductor would come by and scan my card and the scanner would report my monthly pass was valid.

At the end of the week I used my Clipper card to take my Saturday trip to the San Francisco Ferry Building farmers market. When I tagged on the Muni train, I noticed that I had only $3 in cash on my card. That was odd because I knew I had $15 on it the week before. I had only used my Caltrain monthly pass in the interim, so where did the cash go? Suddenly the Caltrain message about deducting money became interesting. Had Caltrain charged me for that first trip, even though I had a monthly pass?

I called Clipper customer service to see what was going on, and they confirmed that I had been charged for my first trip on Caltrain with the new monthly pass. It turns out that you must tag on and tag off the first trip of the month. When you tag on, you get your monthly pass and you start a cash ride. When you tag off, the cash fare is automatically refunded to you.

Since I hadn't tagged off, Caltrain automatically charged me the max fare of $12.50, which explained where my cash went. The Clipper customer service rep was very friendly and said this confusion happened all the time. He also told me that the next time I rode Caltrain I should complete a ride tag on/off to ensure everything was right in the system. He submitted a refund request for me, but warned me that came from Caltrain so it would take a couple weeks. Well that's annoying but ultimately ok I guess.

The next work day, I forgot to tag on when I started my trip. On my way home I decided to tag on at Mountain View and off at San Francisco, figuring a reverse trip would satisfy the system.

When I got to San Francisco that night I immediately walked home without tagging off, because of course I've been doing this every day for three years so my habits are completely ingrained.

Just about four hours later, I realized what I had done. I looked online, and the consensus was that you had four hours from first tag on to Caltrain to tag off, before the system expired out your trip and charged you full fare. I was at home with my two young boys so I had to quickly get them dressed and out the door to walk the ten minutes to the Caltrain station.

And of course, I didn't make it in time. I arrived at the station after the four hour limit. When I tagged my card I saw INVALID FOR TRAVEL: BALANCE -$7.00. By forgetting to tag off a second time I'd taken my card negative and rendered it useless. Christ I felt like an idiot.

A little googling confirmed that you are required to keep at least $1.25 in cash on every Clipper card, even if you only use a monthly Caltrian pass. The reason for this appears to be that Clipper cards can carry a negative balance. The Caltrain website has this to say:

The current maximum one-way fare on Caltrain is $12.50. The Clipper system will allow a negative balance of up to -$11.25 for one ride before additional value must be added to the card. In order to ensure that you have enough value to pay the maximum fare, you are required to have an additional $1.25 on your card.

which sounds somewhat sensible, but where did the maximum negative limit of -$11.25 come from? Why not a nice round -$10? Well, one possibility is that this is tied to the other distance-based transit system using Clipper: BART. The maximum BART fare I could come up with was $10.55 for Fremont to SFO.

Note also that the Clipper card negative balance feature is a way to game the system. Basically you find the cheapest possible card, use it once, and throw it away when it goes negative. What that blog posting doesn't say is that Caltrain requires the ability for Clipper cards to go negative. For normal cash rides, Caltrain doesn't know how much to charge you until you tag off. Caltrain thus 'reserves' the max fare of $12.50 on your card, and refunds you the balance when you tag off. As I demonstrated above, if you don't tag off you get the full charge. I don't think there's any way to implement that system unless the Clipper card can go negative. Ultimately the $1.25 minimum for Caltrain use serves as a buffer against the minimum price ride scam as well, although the basic question left unanswered is why can't Clipper detect the monthly pass on your card instead of deducting cash every time?

So, how did my little story end? At first I was a bit worried, because there is no way to add value to Clipper cards at the Caltrain station. I faced the prospect of being unable to go to work the next day unless I bought a paper Caltrain day pass. Then I remembered I had a $20 Transit Check that a friend had given me a few months earlier. A Transit Check is a voucher you can use as cash for bay area transit services. Turns out you can use them at any Walgreens in San Francisco. The next day, I left for the station early enough to stop by the next door Walgreens first. I used the Transit Check to bring my card back up to a $13 positive balance, problem solved.

Note that I decided to leave well enough alone at that point, and I have yet to complete a tag on / tag off on a Caltrain ride using my Clipper card. At this point I'm afraid to screw it up, I'm going to wait for next month. Maybe I'll tie a ribbon to my finger or something to to make myself tag off next time.

I am actually curious whether the assertion that I have to have $1.25 on my Clipper card is really true if I only ride on Caltrain. I would like to take my card negative again and then have a conductor scan it to see if it comes up as valid for travel. Also note that despite the instructions that you have to tag on and off the first ride of the month, in reality you only have to tag on to trigger your monthly pass download. Of course, if you don't tag off you also get charged $12.50 like I did, so that's a pretty stupid trick.

Now I have to call Clipper customer service yet again and explain why I need another refund. Christ I suck at Clipper.

Guess what? I tagged on today (March 3rd, 2011) to load my March monthly pass onto my clipper card. THEN I FORGOT AGAIN TO TAG OFF. Jesus H. Christ on a rubber crutch. My balance went negative again so once again I had to put extra cash on the card to cover it. I also get to call Clipper Card customer support AGAIN and a ask for another refund. I HATE THIS SYSTEM WITH MUCH PASSION.

I just thought of a possible way around this mess. The Caltrain Clipper FAQ says that if you tag twice at your starting station within 15 minutes, your ride is canceled and you don't get charged.

I know that your monthly pass gets loaded on to your Clipper card the first time you tag on the first day of each month. I've already demonstrated with my incompetence that you don't have to tag off to keep your monthly pass - that just keeps you from getting charged the maximum one-way fare.

So duh, what if you just double tag at your starting station the first day of the month? I'm pretty confident that will download your monthly pass and cancel out the ride charge. Thus, no need to tag off at your destination!

I'll be testing this on April 1 and will report back.

I confirmed my suspicion: there is no reason to ever have to tag off if you have a monthly clipper card. Instead, tag on the first day of the month, which will deduct $8.75 from your account and add your monthly pass. Then wait until the screen display clears back to the default and tag again. The $8.75 you were charged by the first tag will be refunded. However, you monthly pass will remain.

I've used this method every month for the last year without problems. To repeat: if you have a monthly autoloaded Clipper pass, just double tag before you board the train on the first of the month. There's no need to ever tag off as the only purpose of tagging off is to refund the temporary charge. 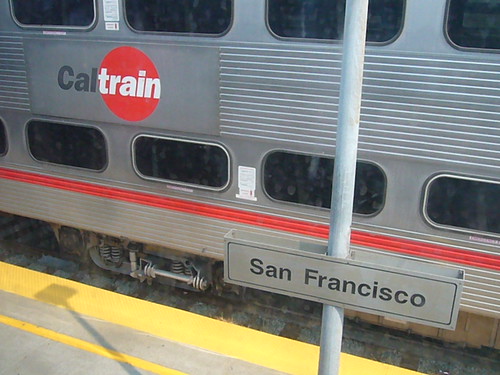